If a relationship happens between two consenting adults, who are we to disagree. However, some age gaps make you think, “what?” For these celebs, the question of age never came to mind, as they made their relationships public. Sometimes it works out, and sometimes not so much. Some celebrity couples with big or questionable age gaps between them include:

Now, the 11 years age gap between these two is not as bad as some of the below. Add to that, that they are a perfect couple, and it becomes difficult to question the gap. Ok, Ryan was in school before Blake was even born, but there are definitely bigger age gaps out there. The question is, how did Blake Lively fall for the man that starred in “Green Lantern.” Well, she was also in it, so I guess something good came from the movie.

These two are no longer an item. Why is that? Well, there were a couple of rumors going around at the time of the split. Many suggested that Lady Gaga might have eyes for her “A Star is Born” co-star Bradley Cooper. That is not what is in question here. The 17 year age gap and the fact that he was her talent agent is.

Jason Statham is Hollywood’s go-to guy for big action movies. If a movie has him in, you know what you are going to get. Maybe that is what drew Rosie Huntington-Whiteley to him, despite the 20 year age gap. Twenty years is a lot, but maybe this couple proves that age is just a number. These two have been going strong for ten years and have a child. There are no signs of things slowing down.

Oscar? Check. Model girlfriend in her early twenties? Check. As Ricky Gervais pointed out at the Golden Globes of 2020, Leo has a habit of going for younger women. Camila Morrone, who is now 23, to Leo’s 46, is a sign that he didn’t take the joke seriously. The two have been together for just over two years, leading many to think that this is something serious. 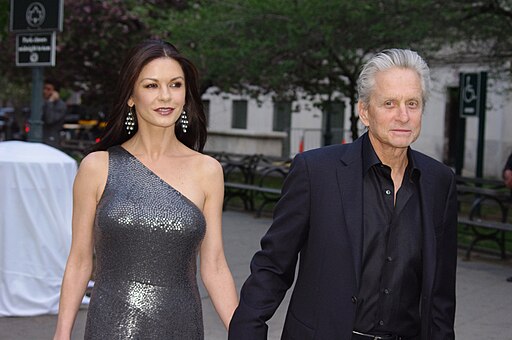 You can’t have a list about couple age gaps without Michael Douglas and Catherine Zeta-Jones making an appearance. The couple met back in 1998 and have been together ever since. They did take a small break in 2013, but it was only brief. Rumors have recently sprung up again about a possible divorce. For now, the couple of 20 years are still going strong.

The Hoff himself questioned the 28 years between him and his wife, Hayley Roberts. He was concerned that he would take away the fun of growing old with someone and take away the chance for Hayley to have children. That didn’t stop Hayley as they got married back in 2018. David was later quoted as saying Hayley didn’t want children, so it didn’t prove to be an obstacle. If they are happy, who are we to judge.

Compared to some of the above, a ten year age gap is pretty tame. However, that really depends on the ages of the two people in question. Yes, Elvis Presley was the King of Rock’ n’ Roll, so he got away with a bit more than the average Joe, but to date a 14-year-old at the age of 24 raises some moral questions. A bit of further research suggests that she was essentially groomed to be Elvis’s perfect wife. The two did wait until they got married in 1967 when Priscilla was 21 before they consummated their relationship, so there is that, I guess.

Don Mclean is another music legend with a questionable age gap with his partner. At least the American Pie singer waited until Paris Dylan was legal, as they started dating when she was around 22 years old. Now the 48 year age gap might lead many to say that Paris is a gold digger. Don Mclean has hit out at such claims. True or not, he gave the world American Pie, so if he wants to blow his $200 million fortune on a lingerie model and he isn’t breaking any laws, we say go for it.

The media love an age gap between celeb couples. It creates all sorts of gossip, and in truth, this piece wouldn’t exist without them. One couple that tends to escape such attention is Sir Patrick Stewart and Sunny Ozell, Lady Stewart. Their relationship started while Patrick was in New York, starring in Macbeth. Sunny’s father wasn’t too keen on the idea due to the 38-year age gap. The fact that Patrick was five years older than her father also didn’t help. But of course, if anyone could win him over, it would be Sir Partick. They are two happily married consenting adults, so all is good.

So far, the age gap has come with an older man and a younger woman. It’s time to turn things on their heads now, as Stacy Ann Ferguson or Fergie, who was 23 at the time, shared a brief relationship with a then 16-year-old Justin Timberlake. Every teenage boy’s dream? Maybe. A questionable relationship taking advantage of a teen? Definitely.

Ok, we took a break from creepy men for a second there. Let’s get back to it with Steven Tyler and Julia Holcomb, who met back in 1973. Steven was 27, and Julia was 16. Again, the age gap is not so questionable, but the ages at which it takes place is. What’s even worse is that Julia’s mother signed over guardianship of her child to Steven. The two split up in 1977, reportedly because Tyler was trying to force Holcomb to abort their first child.

Not too sure where to start with this one. When the two first started dating, Soon-Yi was 20 years old while Woody Allen was in his fifties. They were both consenting adults, so, despite the age gap all was legal. However, that isn’t when the two first met. Woody met Soon-Yi when she was 11 years old while he was dating her adoptive mother, Mia Farrow. The relationship is surrounded by sexual abuse allegations, though not between the two. One of Allen’s adopted children, Dylan Farrow, brought forward allegations of sexual abuse which were backed up by a babysitter and friend of Mia Farrow, Allen’s ex-partner. There were no physical signs of molestation. Soon-Yi has recently defended Woody against those allegations. Even so, the nature of the relationship, plus the allegations, brings many things into question.